As the nineties BBC comedy show Absolutely Fabulous morphs into The Movie this month, we take a look at the London haunts of Eddy and Patsy, the age-defying characters played by Jennifer Saunders and Joanna Lumley. The capital is awash with Ab Fab this summer, from window displays at Liberty, Regent Street, to the premiere in Leicester Square. To celebrate its silver screen debut, we find 10 properties for sale or to let, where the duo would feel right at home.

Sloane Square has long been the territory of the ubiquitous trendsetter. Eddy and Patsy are a breed apart and they would find this part of London entirely to their taste. King’s Road is famous for its quirky boutiques and chic fashion stores. Just the sort of places our two divas could spend their time. Alternatively, they might try the Bluebird restaurant further along King’s Road. This second-floor apartment has two bedrooms – perfect for the girls to relax.

A lavish lunch at Bibendum, followed by a shopping spree at Stella McCartney (who features in the movie) Fulham Road. The perfect jaunt for Eddy and Patsy perhaps. This plush Sloane Avenue property puts you centre stage to follow in their footsteps.

So handy for Harvey Nichols. This two-bedroom flat could do with a little renovation, but it is a property full of potential. Once, you have redecorated, it’s time to get out and shop. Harvey Nichols is a few minutes away.

Bayswater is Jennifer Saunders’ old stomping ground, although she’s moved to the country now. She has said that she’d love to live in Hyde Park, to give her the best of both worlds. This one-bedroom flat is just past the west end of the park and close to Bayswater.

Ladies who lunch love The Ivy Chelsea Garden. Jennifer Saunders found her inspiration for the PR boss Eddy in Lynne Franks. Maybe you’ll find inspiration here. This newly refurbished, two-bedroom flat has had the magic wand of an interior designer waved over it to set the scene for your future success.

Eddy claimed that she and Saffy lived in Holland Park, but their fictional address was 34 Claremont Avenue, W11. But who’s quibbling? If you want an upmarket address in west London, how about this one? It’s a beautiful Georgian gem with five bedrooms and a self-contained flat.

Ab Fab The Movie had its premiere at Leicester Square, where the red carpet is well trodden. Why not pop along to see who turns up there next? This sixth floor apartment is just a couple of stops away on the Piccadilly Line. It has a bird’s eye view of Hyde Park from the sitting room and balcony. There are two bedrooms and a concierge to attend to all your needs.

Eddy’s tendency to splash out on expensive art means she’s bound to hang out in the Saatchi Gallery. Just off the King’s Road in the Duke of York’s HQ, this repository of contemporary works has plenty of restaurants and designers stores nearby. This first floor flat has two bedroom with a cool, calm and contemporary interior. It would make a perfect pad for art lovers and has two balconies for enjoying summer evenings.

Where would the infamous Ab Fab duo go for groceries? Harrods, of course. So where better to live than opposite the London icon? This lateral three-bed apartment extends across the first floor of this red brick building. You could almost call your order from the windows.

Eddy and Patsy would love Elizabeth Street. It has one of London’s best cafes, Baker & Space. There is an array of designer shops and eateries from Jeroboams and Poilane bakery to Jenny Packham, Philip Treacy and Tabitha Webb. Here is a modern pied a terre to let nearby. This two-bedroom flat in Ebury Street is on the fifth floor – just like the restaurant at Harvey Nichols. What could be more appropriate? 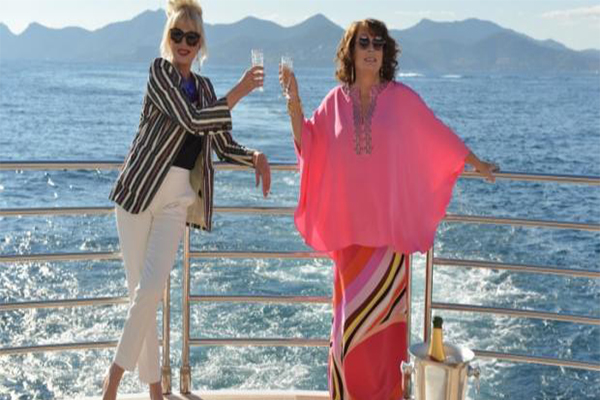