Take a look inside the ultimate party pad

London's ultimate party pad is on the market. Not located in the Shard or a trendy Soho square, but in Notting Hill, W11.

This pretty property with its pastel-coloured hue is surrounded by celebrity neighbours, from rock stars and actors to pop idols and politicians. When walking along Queensdale Place, a feeling of calm washes over you. No jumbo jets screeching across the sky or 4x4s on the school run. Just a few painters adding their finishing touches to their latest makeovers.

Here is a house that could have been built in the Georgian period. Imposing sash windows, a well-proportioned portico and a huge front door give the feeling of grace and grandeur. A bygone era springs to mind. But first impressions can be deceiving.

Just another Georgian gem in Notting Hill? No, this is a new kid on the block. It’s one man’s vision, who wanted to create a family home for his wife and children.

Most developers would have walked away at the mere mention of this project. It took around five years to complete and 18 party-wall agreements thrown in for good measure. Many of us usually fall at the first hurdle when it comes to planning permission, but the owner pressed on. It was something of a Grand Designs project. More Kevin McCloud than Hugh Grant in this exclusive enclave of Notting Hill.

To approach the property, you must step through some automatic gates underneath a covered archway, then ‘X’ marks the spot. At the touch of a button, you are delivered by a car lift into another world. A world that many of us can only imagine.

A vintage Aston Martin is parked in one corner. A Seventies-retro diner and bar in the other. All overlooked by a bubble chair that hangs in suspension, awaiting the new owners to take up residence. Yet no party pad would be complete without a swimming pool. It is not an Olympic size, but large enough for an early-morning or late-night dip.

The previous owner filled the interior with modern twists from pop art to neon lighting and glass chandeliers. But surely the highlight is the “home cinema” fitted with an enormous flat-screen TV for entertaining family or friends. High above, a small dark room is only missing Fatboy Slim with his decks to bring the party to life.

The basement is a central hub, but there is so much more to this property. Leave the electric-blue lighting behind and a more sophisticated atmosphere awaits upstairs in the five-bedroom house. Above the sweeping spiral staircase, a glass atrium looks down on the property below. It is unique in so many ways.

James Bailey, Chief Executive of Henry & James agrees. “This kind of property only comes on the market once in 25 years. It is designed for fun, privacy and entertaining. But equally it would make a substantial family home. There is even a pizza oven in the garden.”

A pizza oven might be useful, but wouldn’t a kebab be more appropriate after a hard night of partying? Either way, it will be interesting to see who buys this property.

Will the bar, diner and pool table survive the ravages of time? An owner with a sense of adventure would not remove these features. Yet a more ambitious buyer might want to stamp their own mark on this millionaire mansion. If they snap it up quickly, they could move in time for New Year’s Eve to host the ultimate party. Just don’t forget to invite the neighbours. 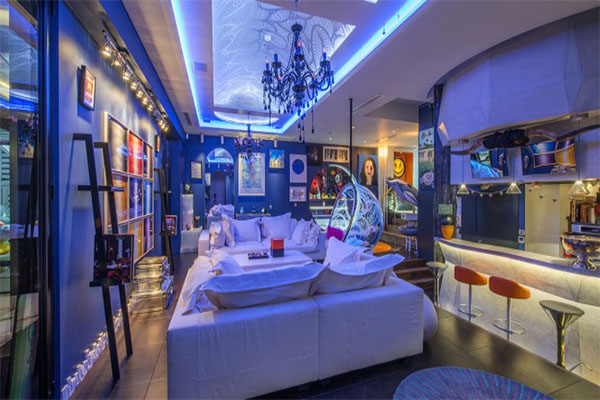