Picture Perfect: on location in Belgravia, Kensington and Chelsea

For movie buffs, October is always a special month, dominated by the London Film Festival, which runs from October 4 - 15. The festival not only showcases new films, but serves as a reminder of the many occasions when London has played a starring role on the silver screen.

There have been so many films shot in Belgravia, Kensington and Chelsea that it would be impossible to name them all, but here is our pick of the stand-out movies or television programmes shot in the capital, with homes for sale or to let nearby.

The memorable scene in which M, played by Judi Dench, has her house broken into by Daniel Craig’s Bond, was filmed in a flat on Cadogan Square formerly owned by composer John Barry. The imposing red brick buildings have enduring appeal, attracting families and young professionals to the area.

Shifting from classic films to iconic television shows, scenes from Downton Abbey were shot in Belgrave Square, London SW1X. Town houses on the square can cost upwards of £10 million. Clearly nothing but the best would do for the Earl of Grantham and his family.

For sale nearby: a short walk from Harrods lies this lateral three-bedroom apartment on Hans Road, London SW3, £7,250,000. For more details, visit http://www.henryandjames.co.uk/property?id=56992D7D948E0

Stanley Kubrick’s masterpiece A Clockwork Orange, in which the King’s Road in Chelsea makes a cameo appearance. The King’s Road is still a hub for fashionable London with The Ivy Chelsea Garden, Bluebird Café and Anthropologie.

For sale nearby: a three-bedroom light and luxurious town house in Hasker Street, London SW3, £3,450,000. For more details, visit http://www.henryandjames.co.uk/property?id=591452F6AEC63

A Swinging Sixties classic, starring David Hemmings as a fashion photographer, and featuring a trendy party at Cheyne Walk in Chelsea, SW3. The area has attracted numerous movie stars, rock stars and authors over the years from Ian Fleming and Laurence Olivier to Bram Stoker and Mick Jagger. Cheyne Walk was also mentioned in Anthony Horowitz’s Stormbreaker, an action spy novel and movie released in 2006.

For sale nearby: a stunning two-bedroom apartment full of colour and character on Embankment Gardens, London SW3. It is minutes from Battersea Park and the King’s Road, £795 p/w. For more details, visit http://www.henryandjames.co.uk/property?id=59CD267AD05C8

If Belgravia is not already famous enough, it enjoyed the reflected glory of appearing in a memorable episode of the BBC’s Sherlock, A Scandal in Belgravia. The cobbled street on which Holmes and Watson had one of their tiffs was actually Boscobel Place, a private residential area, just off Elizabeth Street. In 2016, a four-bedroom mews house came on the market in Boscobel Place for £5million – a step-up from Baker Street, where Holmes and Watson might find a snug two-bedroom flat for less than £1million.

For sale nearby: a beautiful Belgravia bolthole with two-bedrooms on Kinnerton Street, London SW1X is on the market for £3,500,000. For more details, visit http://www.henryandjames.co.uk/property?id=593FA23362D25

A Doctor Who spin-off in which the Daleks invade Planet Earth land in, of all places, Sloane Square, Chelsea. Today, the area near Sloane Square has been transformed with the emergence of Pavilion Road, bursting with fashionable food and drink shops. The hidden backwater is an instant hit with local residents and shoppers, breathing new life into the £205m redevelopment of Sloane Street.

For sale nearby: a lateral Grade II-Listed two-bedroom corner apartment on Eaton Square, London SW1 is on the market for £2,795,000. For more details, visit http://www.henryandjames.co.uk/property?id=58A5B6539BFA4

A charming biopic about J M Barrie, starring Johnny Depp and Kate Winslet, which has scenes filmed in Kensington Gardens, London W2.  Agatha Christie’s Poirot: Cards on the Table (2005) was also set in Kensington Gardens. The properties surrounding Kensington Gardens are always in demand for their far-reaching views over the park, proximity to Kensington High Street and good transport links. It is a magical location and little surprise that the area proves popular with homeowners as well as filmmakers.

For sale nearby: our first churchconversion in more than sixty years. On the market for £7.5 million, the six-bedroom property on Stratford Road, Kensington, is attached to, and was once part of, the church of St Philip, which dates from 1857. For more details, visit  http://www.henryandjames.co.uk/property?id=583C18470E660

Hitchcock’s The Man Who Knew Too Much in which James Stewart and Doris Day combine to thwart an attempted political assassination in the Royal Albert Hall, Kensington. The concert hall regularly features performances from Star Wars and Disney classics such as Fantasia for families and the Proms.

For sale nearby: a stylish one-bedroom apartment on Thurloe Place, London SW3 is on the market for £1.375 million. For more details, visit http://www.henryandjames.co.uk/property?id=594105689C21A 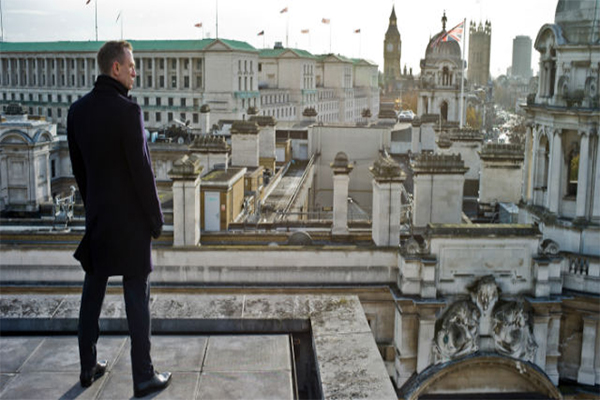