Dan Jones is changing the face of history, armed with a sense of humour and passion for the past. The cool TV presenter and historian is about to star in a new television series on Channel 5. Here he reveals a secret smugglers’ tunnel hidden beneath the Thames, picks his three luxuries if stranded on a desert island and whisks us back in time.

Q: How did you get started in TV presenting?

A: I went to about a thousand meetings with production companies and commissioners over nearly ten years. I considered jobs hosting pretty much anything, including one show in which I was going to catch ghosts from history. After a time, I began to write-off the TV industry, but then hey presto. I also wrote some books, which did well and eventually someone decided to take a punt. Then Channel 5 got in touch some years later and gave me two series of my own: one about England’s medieval kings and another about Castles.

Q: What attracted you to the world of history?

A:  I had a good teacher at school, which counts for everything.

A: A notepad. A packet of biros. A pair of expensive sunglasses. (I’m guessing I can’t take my phone.)

Q: Can you share some fun historical facts on London?

A: I will tell you my favourite fun factoid about London, which used to be my favourite topic of speculation in the pub where I drank and sometimes still drink in Battersea in south west London. According to a few locals, there was a secret tunnel hidden beneath the Thames, one of the entrances of which was located somewhere around Battersea Square, in a building that was once called The Raven pub, but is now an Italian restaurant.

What was this tunnel for? Well, it depends on who you ask, but some people used to say that it was dug as a smuggler’s tunnel, and was subsequently adapted to allow the Prince Regent (or sometimes Charles II) to smuggle his mistresses into town. Into town? Wait, doesn’t this tunnel come out in the basement of a pub that was built in the Nineteenth century? In Battersea? Well, yes, but don’t mention that. And where does this tunnel go? Well, sometimes it went to the south bank of the Thames, near St Mary’s Church… other times it went right under the river and came out near one of those pubs around the back of the King’s Road.

Wouldn’t that mean that in theory there was a tunnel dug under the Thames during the 1660s, a feat of engineering far beyond even the great minds of the Seventeenth century? Yes, but there was a tunnel. Probably. We always said one day that we would go down into the basement of the Italian restaurant and check it out. I love London, particularly its folk histories. They are the best.

A: Warm. Comfy. Full fridge and a drinks trolley with a fresh ice bucket. Built in the Nineteenth century, but with a new boiler and a roof that doesn’t leak. Everything else is a bonus.

Q: Tell us a little about your new programme?

A: Elizabeth is a three-part documentary-drama about Elizabeth I and the plots, which continued throughout her reign. Dr Suzannah Lipscomb and I present the programme and there is an impressive cast of actors bringing it to life, or death, as the case may be.

It looks amazing and we are very proud of it. It takes you from the dangerous days when Elizabeth’s father chopped her mother’s head off all the way to the end of the reign when the Earl of Essex was leading a mob through the streets of London in protest against losing Elizabeth’s favour. The show follows on from our recent Channel 5 documentary about Henry VIII and His Wives and it is every bit as exciting.

Q: Everyone knows about the popular historical attractions? Could you tell us about any secret Tudor or Elizabethan attractions or locations?

A: One of my favourite locations is Ingatestone Hall (www.ingatestonehall.com) in Essex, where we filmed quite a lot of the new show. Beautiful red-brick pile built by the great mid-Tudor statesman Sir William Petre. There are two extraordinary priest-holes there.

A: The sense of confluence. Unlike in most other countries, everything in the UK is led by the capital. It’s the financial centre. The legal centre. The media centre. A sporting powerhouse. The home of national government. If you’re in London, you’re in the thick of things in a way that you are not anywhere else.

A: Permanently? Nowhere. I’m happy here. We have paracetamol, 4G mobile signal, Sat Nav and running water. But it would be good to take a tour of a time I have written about, to see what I got right… or wrong. The Magna Carta in 1215.

Q: Have you had any DIY disasters over the years that you can reveal?

A: I have a fairly good gauge of my competency threshold when it comes to DIY: I can do laborious but not precise tasks, and don’t try what I know I can’t do. I also have a healthy respect for trained and chartered professionals, whom I would always rather pay to do something the first time.

The only exception I have made for this, was to build the kids a garden playhouse from flat-pack at Christmas last year. In my head, this was a job that would be about Ikea-grade hard. Turns out this was actually building a medium-sized shed on stilts, which meant measuring, sawing, hammering, drilling, making things level and felting the roof.

It took more than fourteen hours over three days in the biting cold on my own, working with a torch in my mouth to get it finished. It looks okay. A bit wonky, but okay. The girls have played in it I think three or four times.

A: I could look at the Hammerbeam roof in Westminster Hall for longer than you would think possible, marvelling at the job done by Henry Yevele in the fourteenth century. Yevele was the king’s master mason and a genius. He also oversaw the construction of the gatehouse at Cooling Castle, once the home of John, Lord Cobham and Sir John Oldcastle, and now Jools Holland’s country place. A few years ago we went round for lunch and Jools hired a cherry picker, so we could go up and inspect the gatehouse’s crenellations. That was fun.

Q: And finally, what advice would you give to anyone who wants to break into TV presenting? 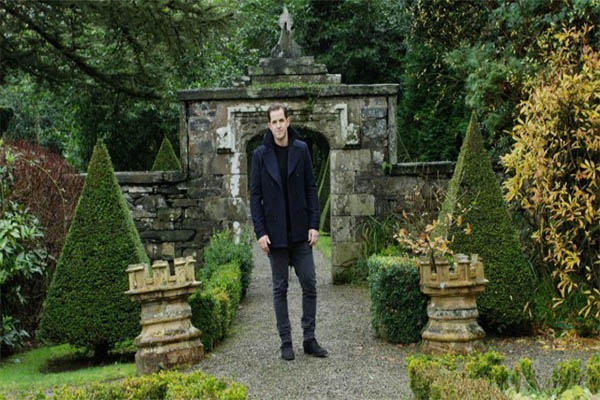