Ben Saunders reveals his perfect home, the joys of living in London and three things he would take if stranded on a desert island. He is a man on mission.

Q: What do you like about London? How long have you lived here?

A: I love the energy, the vibrancy, the mixing pot of people and culture. I’ve realised that I like extremes. I enjoy the wilderness and big cities, but I get bored easily in suburbia. I’ve lived in London since 2000 in various locations, but mostly south and west.

Q: What is the biggest challenge you have faced so far?

A: The Scott Expedition for many many reasons. It was not only an incredibly hard physical and mental challenge (we broke the world record for the longest ever polar journey on foot, at 1800 miles – 108 days) but it was a mammoth commercial and logistical project with a huge team working full time on it for nearly two years and a seven figure sponsorship budget.

Q: You trained intensively in Norway and Canada, but when you are preparing in London, where are your favourite parks to train in?

A: I was living in Battersea when I was preparing to go to Antarctica, so obviously there were no glaciers nearby. Richmond Park, I would say, was a favourite stomping ground and I did a lot of running along the river.

Q: You have been to the world’s most remote and extreme places, but if you were stranded on a desert island, what three things would you take with you?

A: I would take a pen and a big pile of paper, so I could write my book, and my bed, having spent three and a half months sleeping on ice in Antarctica.

Q: Can you describe your perfect home?

A: A home with a view – something modern and relatively minimal. Preferably on the edge of an uninhabited Norwegian fjord.

Q: What do you eat during your expeditions?

A: A lot! Unfortunately, mostly freeze-dried and out of a bag which we had to rehydrate from melted snow every morning and evening. One of the four varieties of chicken curry was always a highlight.

Q: What was the first home you bought?

A: I’m an inveterate renter.

Q: If you could go on an adventure with any celebrity, who would you take with you?

A: A decent chef (I know that Gordon Ramsay has a penchant for endurance challenges) and I would love to do a film of an expedition with Sir David Attenborough.

A: I spent a lot of my childhood outdoors in the West Country – rural Devon and Somerset. I was in the Scouts, then after school, I worked for a year in the Scottish Highlands for John Ridgway (www.johnridgway.co.uk/home.html) who was the first person to row across the Atlantic. So I blame him! My first expedition was in 2001, aged 23, with a guy called Pen Hadow (www.penhadow.com/). I thought it would be a one off, little did I know it would be the start of a 15-year career.

Q: You succeeded where Scott and Shackleton failed, what was your secret to success?

A: In some ways, even though we were the first people to walk the entire route that they had intended to walk, the expeditions were very different. Scott and Shackleton had both sailed away from home for years at a time and were completely isolated with no hope of rescue and no communication, whereas we had a safety net of aircraft, satellite communications, etc. that didn’t exist for them. We had the benefit of 21st century clothing, equipment, technology, nutrition and knowledge of physiology and psychology. Although that didn’t always make things easier – we were actually pulling twice as much weight as Scott’s men were (200kg each).

Q: What is your next big adventure?

A: Avaunt magazine (https://avauntmagazine.com/). It is an adventure of a different kind. In fact a publication dedicated to adventure in the broadest possible sense. We were described in the Italian press recently as “National Geographic with style”, which I think sums it up rather well.

Q: Who or what inspires you?

A: In my teens I was inspired by reading books by two contemporary British polar explorers, Sir Ranulph Fiennes (www.ranulphfiennes.co.uk) and Robert Swan (http://2041.com/robert-swan), both of whom I am lucky enough to now call friends. I continue to be inspired by some lesser known Norwegian polar pioneers, namely Borge Ousland (http://www.ousland.no/), and Erling Kagge (http://www.explorapoles.org/explorers/profile/kagge_erling/No%20personal%20website).

Q: Do you have a favourite architect?

A: A Canadian architect called Todd Saunders (http://saunders.no/), no relation!

Q: What advice would you give to anyone who wants to be become an explorer?

A: I would advise them to think long and hard about trying to make a career out of exploration as a huge amount of my time is actually spent at a desk, in meetings, on conference calls and juggling PowerPoint presentations and excel spreadsheets. Paradoxically, given my own career path I also think there are fantastic opportunities for adventure on our doorsteps and I still love running with my dog in Richmond Park on a crisp winter’s morning with frost on the ground.

Q: And finally, what drives you in life?

A: In a very literal sense, I’m lucky enough to drive a Land Rover (they’ve supported me since 2008) but I’m also motivated by a belief that – as Helen Keller once said – “life is either a daring adventure or nothing”. 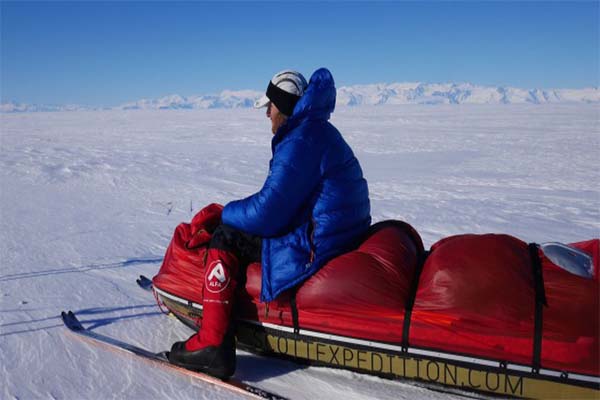