Classic in the making: Behind the scenes of Channel 5’s new drama

Brett Wilson, Producer of Channel’s 5 new drama, has worked with some of the biggest names in television. Think Blake Harrison (The Inbetweeners), Pippa Haywood (The Body Guard) and Tim McInnerny (Blackadder). Here Brett talks about the challenges of shooting a 95-minute film in 18 days, the hardest prop to source and his favourite character in the new drama.

Q: Tell us about the new film?

A: The premise of the film is about what happened to Agatha Christie when she went missing for 11 days in 1926. It is a fictitious film about that period of her life, written in the style of a whodunnit from that era.

Q: How long did the new film take to shoot?

A: We had a very rushed 16 days to shoot a 95-minute film! Crazy really but we ‘almost’ managed it. We had a couple of pick days after principal photography, so officially it’s 18 days. Still not bad going.

Q: Any memorable or funny moments behind the scenes that you can share with us?

A: I’m afraid what happens on set, stays on set….

Q: What was the hardest prop to source?

A: It was actually a vehicle. We wanted to use a 1920s bus, but couldn’t find one, so we used two huge old Austin cars instead to carry our ensemble cast to and from the whodunnit location in the film.

A: At the time of her disappearance in 1926 – when our film is set – Agatha Christie actually lived on the outskirts of London in Sunningdale, Berkshire, near Ascot Racecourse. After divorce from her then husband Archie, I believe she moved to Devon.

Q: How many books did she write during her lifetime?

A: There were 82 books written as Agatha Christie, with six under the pen name Mary Westmacott and two as Christie Mallowan (she was married to archaeologist, Sir Max Mallowan).

Q: What three props from your latest film, would you take with you, if you were stranded on a desert island?

A: The gramophone and all the old 1920s records; they were fabulous. I’d also take the decanter full of Scotch, as refreshment for when I’m listening to Al Bowlly’s 78s.

Q: Who would you choose to solve the mystery of her disappearance – Miss Marple or Hercule Poirot?

A: Poirot. He had the better outfits.

Q: What was the biggest challenge to film in a lived-in house?

A: These beautiful old houses are full of such wonderful treasures and artefacts that have been handed down over the years. The biggest challenge is keeping everyone respectful that this is someone’s home and that these treasures often have great sentimental value to the owners. I walk around policing the locations to try and stop breakages. It’s a terrible habit that I have had since being in a locations department.

Q: Without giving away the plot, who was your favourite character in the film and why?

A: Travis Pickford, played brilliantly by Blake Harrison. He’s such a funny character and juxtaposes the ‘better bred’ characters in the ensemble cast. I would love to produce a series of: ‘The Adventures of Travis Pickford”. I think Blake’s up for that, too.

Q: What advice would you give to anyone, who wants to become a film Producer? 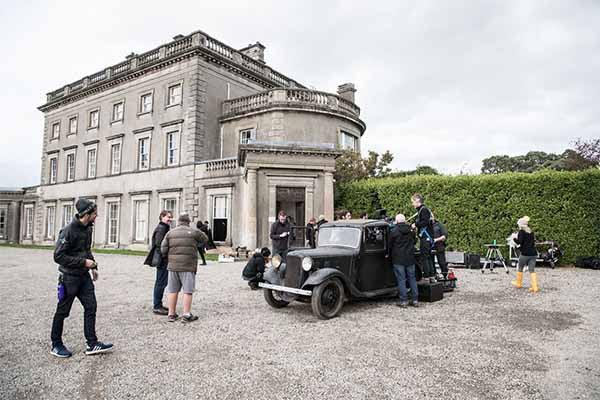