Covering 350 acres, Hyde Park is arguably one of London’s finest landscapes. It was originally the private land of Henry VIII, who would be seen on horseback riding through this oasis in the capital. With much to offer, it is one of the many reasons people choose Belgravia, Chelsea or Kensington. Properties overlooking the park will always command a premium, but the views and location are hard to beat. Continuing our city spotlight series, we look at 10 reasons to live near Hyde Park.

Hyde Park has its own stables that offer horse riding lessons and arena lessons. This is not just a summer novelty – the stables are open all year round. They only have horses and ponies chosen for their safe temperament, catering for riders of all abilities. Horse riding is a great social activity for children and adults. For more information, visit www.hydeparkstables.com

Did you know that Olympic swimmers used to swim in open water before the British introduced the pool in 1908? They would literally compete alongside the wildlife. You can take a step back in time and swim in the Serpentine Lido, which has more than 100 yards of open water. Complete with an exclusive children’s playground, and a paddling pool. The Lido has been a Londoner’s escape for more than a century. The oldest swimming club in Britain, the Serpentine Swimming Club, swim there every day between 6am and 9:30am.

A brush with art

Living in an urban area with green space has proven to be beneficial for mental well-being. Mathew White, from the European Centre for Environment and Human Health at the University of Exeter, conducted studies which showed that life events such as promotions at work, or even winning the lottery, only improve our mental health for about six months before we go ‘back to the baseline’. But he discovered that people who moved near to a green space were much more likely to have improved mental health for at least three years.

If Andy Murray had you itching to dig out your tennis racket, then living near Hyde Park might be the answer. The Will to Win Tennis Centre is open all year round, and there’s something for everyone: a comprehensive programme of adult and junior drop-in sessions, courses, tournaments and events. The park has six hard courts and two mini tennis courts, which can be booked in advance with a ‘Smartcard’ membership – introduced to allow regular use for local residents.

Did you know that as well as being a beautiful place to live nearby, Hyde Park is a music venue, too? Just recently the park has hosted the annual British Summertime festival, which saw performances from huge names such as Pharrell Williams, Mumford and Sons and Stevie Wonder.

Renowned for being one of the most relaxing sports, Hyde Park is a beautiful location for amateur boating. The park has a fleet of rowing and pedal boats that operate on the famous Serpentine River. The UK’s first Solar Shuttle, glides silently across the lake powered only by the sun. It carries up to 40 passengers, while the pedal and rowing boats hold up to six people each. Boating continues until the end of October.

The Queen opened the fountain in memorial to Diana, Princess of Wales in 2004. The design aims to reflect Diana’s life: water flows from the highest point in two directions as it cascades, swirls and bubbles before meeting in a calm pool at the bottom. It’s a perfect place to take children to play in the water, which is constantly being refreshed and drawn from London’s water table.

Speakers’ Corner, the most famous location for free speech in the world, has existed on the North-East edge of Hyde Park since the 1872 Parks and Gardens Act. It symbolises popular struggles in Britain for the right to vote, speak and assemble. Even today, on a Sunday morning, it’s not unusual to find crowds gathering at Speakers’ Corner to listen to enthusiasts expounding their views. Anyone can turn up unannounced to speak about any subject, as long as the police consider their speeches lawful.

Hyde Park is probably the most bike friendly park in central London. It’s where the Olympic triathlon took place in 2012, too. With a number of different routes and plenty to see, what better inspiration to cycle to work. And if you don’t have your own set of wheels, the park is surrounded by Boris Bike (or ‘Sadiq Cycle’) docking stations, so no matter which side you live on, you’ve got access to London’s cheapest and quickest form of transport. 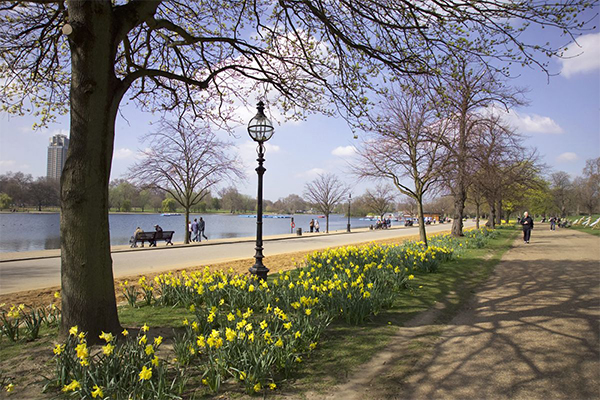