The weaker pound makes top London prices look cheaper to overseas buyers, and interest is rising. Many investors know that the capital will hold its value in the longer term and the rarity value of prime central property will mean it is always sought-after. British developers are taking an added interest in the area, too. Henry & James has worked across Belgravia for 66 years, we have built up a wealth of local knowledge and keep a close eye on market movements. Here is our pick of the best streets to invest in across Belgravia.

Wilton Crescent Wilton Crescent’s gentle curve of imposing stucco or stone-faced town houses have an enduring appeal. Tall and slim, they look down on the passers-by, their sturdy entrances and flighty balconies hiding a wealth of secrets. Many politicians – and similar movers and shakers – have lived in this elegant street and this choice location holds its price well. Even the word “crescent” can boost an address by 40 per cent. It’s not unusual to find the terraces here on the market for more than £30m, but properties here hold tend to hold their value.

This leafy oasis has always been a solid investment. With its impeccable credentials, it commands top prices. Even so, such an exclusive address cannot fail to reap a good return. Belgrave Square and Belgrave Street are the glittering jewels in the crown for buyers. London’s timeless allure can only be enhanced by the weak pound. There’s currently a property for sale just off the square for £13m. Belgrave Square has proved to be a solid investment over the years.

With an average asking price of nearly £5m, this street of pretty mews houses is a calm backwater within walking distance of the shops of Knightsbridge and Motcomb Street in Belgravia. Hyde Park is just around the corner, too. Everything really is on your doorstep.

There is a cheaper option. This two-bed apartment is in a modern block set back from the street but, with an asking price of £1.65m, you can’t beat the location for the price. Other streets to watch just off Kinnerton Street, include Anne’s Close and Studio Place with their beautiful and pastel coloured properties.

The grand terrace of Cadogan Place faces the enticing garden square, while the low-rise Cadogan Lane is made up of the coach houses behind. One of the last properties to sell on Cadogan Place cost £1.9m, but the average price over five years is £4.6m. There’s a great deal of building work going on here at present, with owners investing in their properties while interest rates are low.

This row of stucco fronted town houses is home to several embassies, such is its cachet. The current average value of property based on past sales is £1.7m, but the cheapest flat on the market is nudging £2m. Research suggests that London homeowners are seeing the value of their asset rise by £200 every day at the moment.

This most prestigious address sits at the heart of the Grosvenor family’s Belgravia Estate. The recent death of the sixth Duke of Westminster, Gerald Cavendish Grosvenor, means the £9bn family fortune will now be overseen by 25-year-old Hugh. They made their money from developing property here over the past 400 years. The average price paid in the last 12 months is more than £7m. There’s currently a seven-bedroom mansion in this desirable location for £55m. Other streets to watch nearby include Eaton Mews North, Eaton Mews South and Eaton Place.

Of all Belgravia’s beautiful squares, Chester is considered to be one of the most attractive. The aristocratic houses around it have always been sought-after and it was the location of choice for Margaret Thatcher, who moved here from 10 Downing Street. Her home was for sale with a price tag of £30m earlier this year. The next door property is for sale at £24m.

The Lowndes family started building in the early 19th century, spurred on by the success of developments by their neighbours, the Grosvenors. Lowndes Square is a long, thin garden square close to Knightsbridge and its world-class shopping temptations. It is lined with red brick mansion blocks, interspersed with stucco townhouses, so there is the opportunity to find smaller apartments for less money. Prices start at £1.5m for a one-bedroom flat, but rise to almost £8m for a four bedroom apartment.

Running from Grosvenor Gardens to Pimlico Road, Ebury Street has been a magnet for writers and actors. Alfred, Lord Tennyson, lived at No 42 and Ian Fleming at 22b. Vita Sackville-West and Harold Nicolson lived at 182 and even Mozart stayed in the street for a few months in 1764. Terence Stamp shared a flat with Michael Caine here in the 1960s. You can buy a one-bedroom flat for £1.1m or a four-bed terraced house for just under £8m.

This gracious street boasts average prices of £21m, making it the third most expensive place to buy, after Kensington Palace Gardens and The Boltons. Workmen are now breathing new life into terraces that have been used for non-residential purposes. These owners have the vision to see that even the huge amounts they are spending on total renovation will be recouped. 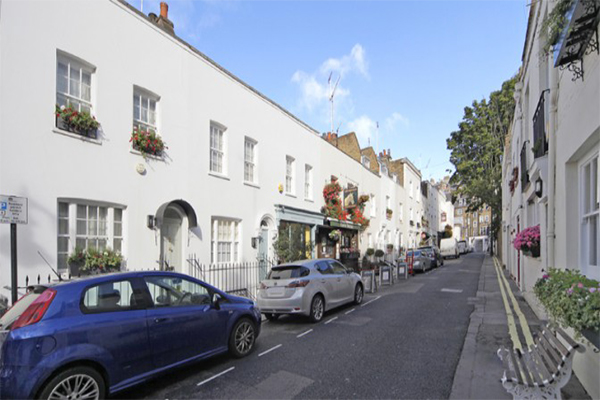