Belgravia regularly tops the list of some the most desirable places to live in London, and the world’s movers and shakers are drawn to the area. With its central location, sugar-frosted, white stucco mansions and their piped icing detail, the leafy streets and pretty garden squares across SW1X retain their celebrity connections. Here are 10 streets, where everyone from Mozart to Roger Moore once lived or owned a slice of Belgravia.

Home to Lord Kitchener, Stewart Granger and Dirk Bogarde, Belgrave Square was the magnificent centrepiece to the Grosvenor Estate. It was built in 1825 and immediately proved popular with wealthy families who wanted to live close to royalty. John Nash’s remodelling of Buckingham House began in 1825 and Queen Victoria moved in a decade later. One six-storey mansion in Belgrave Square went on the market for £100m in 2009. The average price is more than £7m.

This is home to several embassies, but No 9 once belonged to Simone Mirman, milliner to the Queen. She used the lower floors as a salon to sell her wares, leading to a steady stream of famous visitors. Princess Margaret would stop by, as would Hollywood’s finest, including Joan Collins. This was last on the market a year ago for a little under £14m.

Former prime minister Margaret Thatcher retired to No 73, but Chester Square has rubbed shoulders with fame before. Poet Matthew Arnold lived at No 2 and Frankenstein’s creator Mary Shelley at 24. Maggie’s house was put up for sale for £30m earlier this year. Most of the properties are as single homes, so even if you have a few million to spend, you are less likely to be able to pick up a flat here.

This fine London address is a magnet to those with power and wealth.  Prime ministers Stanley Baldwin lived at 93 and Neville Chamberlain at 37. Two James Bonds – Sean Connery and Roger Moore – have lived here (and so did the fictional 007). Frederic Chopin was an early resident. Lord Lucan was a notorious one. Famous faces continue to ebb and flow, including Joan Collins. The most expensive house to go on sale here was priced at £70m.

Mozart composed his first symphony at 180 Ebury Street, aged eight. He was on a grand tour of Europe with his parents and spent the summer of 1764 in Chelsea, while his father, Leopold, recovered from a throat infection. Symphony No 1 in E flat major was first performed in 1765. The houses around number 180 are now known as Mozart’s Row. Noel Coward grew up on this street, too, and James Bond creator Ian Fleming lived here for a while. Apartments in Ebury Street cost £2m, while whole houses of the type Mozart may have lived in can double that figure.

Winston Churchill moved to No 33 with Winnie in 1909 and their son Randolph was born here in 1911. The family lived here for two further years, during which Churchill held important Cabinet posts. The house came up for sale in 2010 with an asking price of £4.75m.

The composer Sir Michael Costa lived at Wilton Court, 59 Eccleston Square. Prices for flats range from £500,000 to more than £1m.

If you live on Grosvenor Place, you live directly behind the Queen, as Buckingham Palace Gardens are bounded by this street. Sir Henry Campbell Bannerman, prime minister from 1905-8, lived at 6 Grosvenor Place from the 1880s. David Niven lived at Grosvenor Gardens – where the Queen Mother was born. Houses go for upwards of £10m but you might find an apartment for under £1m.

Along the back of Sloane Street is Lowndes Square, a garden square of fine stucco mansions built in the late 1830s. Roman Abramovich, the Russian-born owner of Chelsea Football Club, famously bought a number of flats in two adjoining town houses, planning to make them into one mega mansion. The average value of a home on Lowndes Square is £35m. Flats generally go for £3m to £13m.

Thomas Cubitt master builder, who constructed Belgravia, lived at No 2 Lyall Street. This street of elegant, white stucco town houses runs between Chesham Place and Elizabeth Street, where the great and good shop. The houses go for £10-20m, while flats fetch upwards of £1m.

Wilton Crescent was laid out in 1827 and Lord Mountbatten of Burma moved into No 2 in 1959 with his wife.

Lord Randoph Churchill lived at Wilton Terrace, part of the crescent and George Bentham, the botanist, lived at 25 Wilton Place, which leads from the crescent to Knightsbridge.

Terraced town houses in these streets go for £10m and upwards, while flats usually cost around £2m. 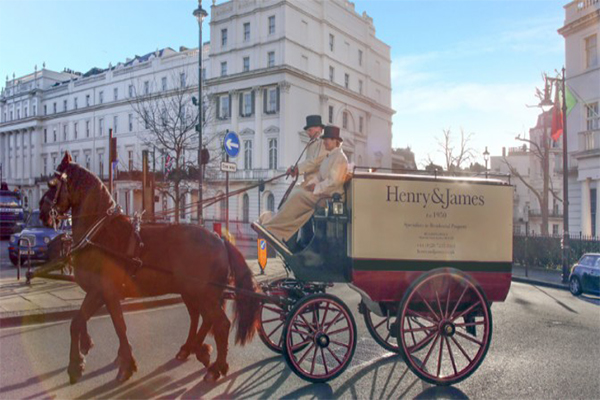